Hi folks,
I'm sorry that I haven't  posted since the beginning of October- 10/8, to be exact, however, here is my OBRM update!
Oystefest during the weekend of October 13 & 15 went ok. For some unknown reason, the weekend wasn't  as great as years past as the foot traffic seemed down considerably and we didn't make as much money as usual.
Oh well, we did what we could. We were not open at all that weekend and resumed our work session on Saturday the 21st.
Fred, George and Bernard ganged up and finished removing the rest of the rotted corrugated steel flooring.

As of yesterday, November 4th, we are (were) ready to begin the installation of the new corrugated flooring-one hitch, though. Do (did) we need a custom pressed floor sheet made or can (could) we use something stock.
After a  lot of research, I found a steel master in East Harlem who could custom press whatever we needed. While my company was on strike, I was out visiting some upper Manhattan accounts and made a pit stop at Aquel Metals on 2nd ave between 118th and 119th streets to meet with Said. He took my sample and was able to give me options.
1-use a stock corrugated galvanized that he could give us for $600, which would be enough to cover the North half of the car OR-----
2-he could custom press the same amount in galvanized steel for $1200.
I took a sample back to the Ping Pong coach to attempt a fit up and after the guys placed the 2 halves into place, we realized that the stock pieces would work VERY WELL!!
So, I guess we go with the lower priced option.
NOT!!!
As George was attempting to break up the thin coat layer of concrete, he broke through rotted flooring on the South half of the car. SO! now we will have to remove the rest of the concrete and all of the (rotted) steel flooring.
What this now means in terms of our budget is that we will now have to spend the entire $1200.
But that's OK as we do have a $10, 000 budget which will also cover the steel channel that we will have to purchase to connect the cars frame to the cross members UNDER the new corrugated steel floor. NO fall throughs!! This budget may also cover the job of sandblasting the exterior of the car. We will have Restora Blast come out to give us a quote. They utilize a new procedure called "Dustless Blasting" which I know from the auto industry.
This process uses a water base with recycled ground glass as the blasting media. NO free silica dust so we DO NOT have to tent the car (save money!) and no vacuuming. everything outside of the car can be blasted which will allow us to also blast the seat frames. The car will be left to rust so we can then roll on a coat of "Extend" which is a rust converter. This gives us a great base for primer and paint. Before the "extend" goes on, we will cut out the rust and flush weld new steel to repair the car. Fred is very excited at this prospect.

The guys removed all of the seats and stacked them in the vestibule of the coach which opened up the interior so we could remove the seat frames from the South half. Even though WE were hosting a group of folks from SPLIA -the Society for the Preservation of Long Islands Antiquities at the Historic Train Station while work was going on a bit shorthanded, George and Fred and Leon and Jack  and even me, were able to get everything except the part of the seat frame which is bolted to the steel floor stock, out of the coach.
Next week, we will remove the concrete and the steel straps with the seat frames intact as a unit and continue until all of the steel is gone from the car. This will be a multi week job which will take us into the winter. We can always hook up space heaters to keep some warmth inside of the steel car. 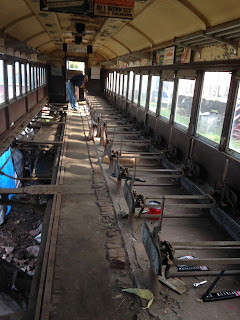 As for the visit from SPLIA?
John Collins, our Historic Architect began the visit with an overview of what was going on from his standpoint, after which, Dave Morrison, my co-chair on the Station Restoration Committee spoke about the station building and Teddy Roosevelt. Then I took over and made my video presentation which went over well. Bill Sheeline, another member of the Station Restoration Committee was able to provide additional information during the presentation.
Dave Morrison speaking-- 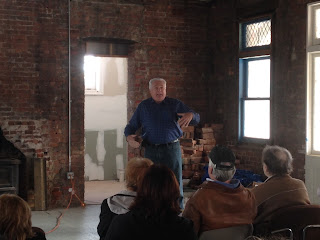 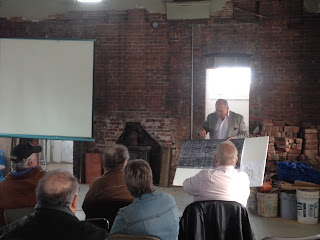 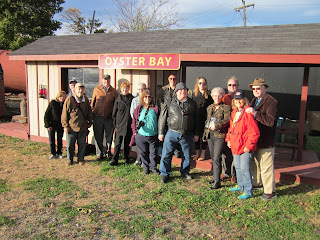 The SPLIA members were very impressed and really enjoyed themselves. After the presentation, we walked over to the display yard to show off #35 and our collection. The turntable impressed all.
the day was long and fun. TODAY, Sunday November 5th, we are hosting the PRRT&HS at 4pm. Steve Torborg will be the host.

As though all of this wasn't enough, Doug from Pedowitz Trucking called me about moving the simulators and our boxcar from the LIRR and I asked him who repairs his forklifts. Turns out that his company has an in-house department that does all repairs in NJ.
I told him of our issues on our forklift and he offered to pick up our Hyster unit and bring it in for an inspection and depending on what was found, repairs as well. DONATED!!
Holy Crap!


More work and more words to come.
See ya.
Gary
Posted by OBRM at 8:39 AM No comments: