Hi folks,
so it seems that I'm late yet again!
2 weeks ago,
George and Bernard continued to remove the concrete floor in the ping pong coach by using electric jackhammers!
I figured, why work harder, so, I went to Baldwin tool rental by my home and picked up the 2 breakers. Needless to say, we decided to work smarter.
All of the concrete was gone by end of day and I'm sure that the 2 of them were feeling good the next day compared to last week!
While this was going on, Fred and I continued to work on the forklift. This is a big, big deal as we will need to get this unit going. We need to move the crossing shanty and the steam engine so to clear out the areas for future expansion of displays.
at the same time, Paul got busy needle scaling the vestibule and staircases on the ping.
Divide and conquer, I say! by doing the job ourselves, we will be able to save on sandblasting costs.


Last Saturday,
Our day began at the station where we removed all of the loose lumber inside and stacked it all under a tarp out on the track side. Georg, John V, Paul,  Steve T and John Specce really got dirty.
At the yard,
Fred and I continued our work on the forklift while Steve Torborg got our compressor re-situated. He also got us fuel and diesel for the compressor.
John V and George worked on cutting up the corrugated steel floor. By removing all of the floor, we will be able to clean all of the steel and treat it in order to prepare it for the new steel installation.
This is a full press restoration. Floors, walls and then paint removal!
We believe that we can get this job done by end of year 2018.
It's funny to see that the coach is cockeyed to the South.
Paul continued to needle scale the vestibule and we believe that we are more than halfway there.
If you ain't here, you just ain't!!
Any comments??
Bring 'em on.
Gary

Another great day in Oyster Bay

Hi folks,
let's get right to it, shall we?
So, while we were formulating a plan to remove the rotted floors inside the Ping Pong Coach,
reality intervened and told us what to do.
George and Bernard, found out that the false floor underneath the coach was made up of thinner steel sheets which were bolted to each other and then bolted up to the center sill.
Trying to remove them from the underside like we had hoped to do, proved impossible, SO!, these two gents figured out that just breaking up the concrete from the inside of the car, proved the best way.
This process released the concrete from the  rotted corrugated sheet that it was poured into, forming the floor and allowed them to then cut up the corrugated steel. After this process, they were then able to remove the false floor which now is all gone for about 15 feet of the car. Starting from the West end of the car they also began to remove the concrete over the center sill, which is a channel with a depressed, solid steel top. They figured out that the steel plates which they found underneath the seat mounting frames is actually bolted down to the center sill. By cutting the few attachment points, they were able to remove the one plate which was empty. 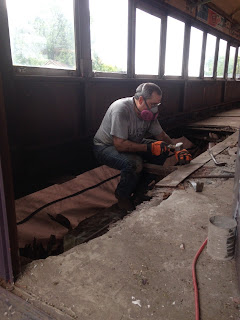 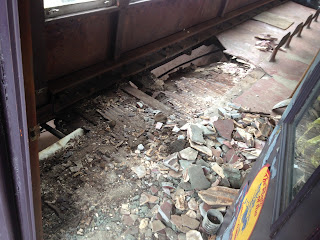 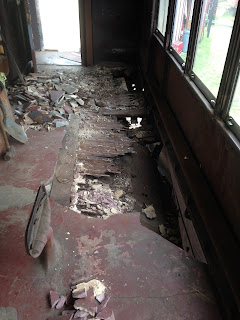 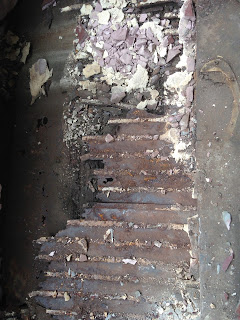 The photos above show what needed to be done .

In order to facilitate the cleanup, they first had to tarp the outside of the car to be able to trap whatever fell underneath the car. 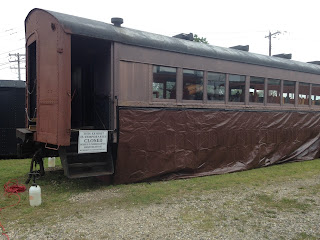 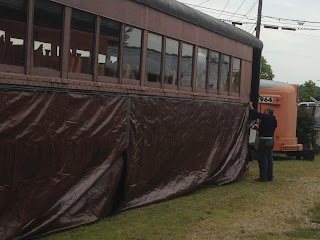 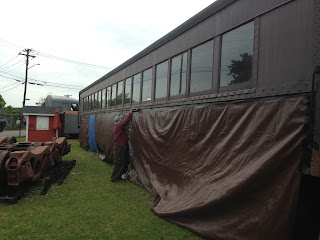 Since we began the restoration of this valuable piece of equipment, we have made the car off limits to our guests. We hope that we can get this North side of the floor out by spring and begin the re-installation of a new corrugated steel floor and concrete. Afterwards, we can then repeat this process on the South side of the car. Then we plan on putting 12x12 vinyl or linoleum tiles back as the original floor was made of one of these materials.. We found a small piece under the seat frame while it was being removed.

While this was going on these past weeks, we also began to strip the paint from the west vestibule and stair cases. While removing paint last week on the North stairwell, I found some interesting paint colors. the brighter red caught my eye as it appears to be directly over the primer coat. 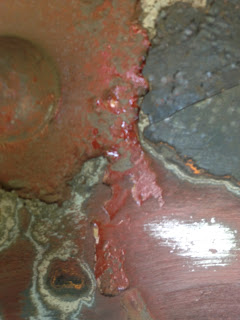 And if all this wasn't enough, yesterday, Fred Ruben finally got the forklift to fire up. We are still a ways away from declaring victory in order to use and abuse it, however, we were told that this unit would never work again, so, nuts to all of those naysayers out there!
We owe a huge debt of gratitude to Fred and John Petsche who worked tirelessly to help get this unit back to operating condition.
Nappy started the ball rolling and they kept it moving. Thanks guys!
Hopefully, we can have it working next week.

Enjoy the labor day holiday and I'll speak to you next week.
Don't work too hard!
Gary